As a team, we’ve been very involved in Stirling Airsoft’s England vs Scotland games and absolutely love doing them. But it’s a long wait inbetween them, being held once a year in December. While we were sitting waiting this year, a post caught our eyes. Stirling Airsoft, at Catterick FIBUA, which is local for most of us, were going to do a themed weekend based on the greatest war film of them all : Black Hawk Down.

With lots of fans of the film in the team, we couldn’t say no. Stirling are superb event organisers, and we had high hopes in the months building up. It didn’t disappoint.

Officially, the operation in Mogadishu was called Operation Gothic Serpent, which as well know went horribly wrong for US Delta Force and Rangers versus the local militia. With national allegiances not involved in this event, the Monkeys contingent split up and played both sides, which is a first for us, but an opportunity to have a laugh and pit the veterans against some younger legs… 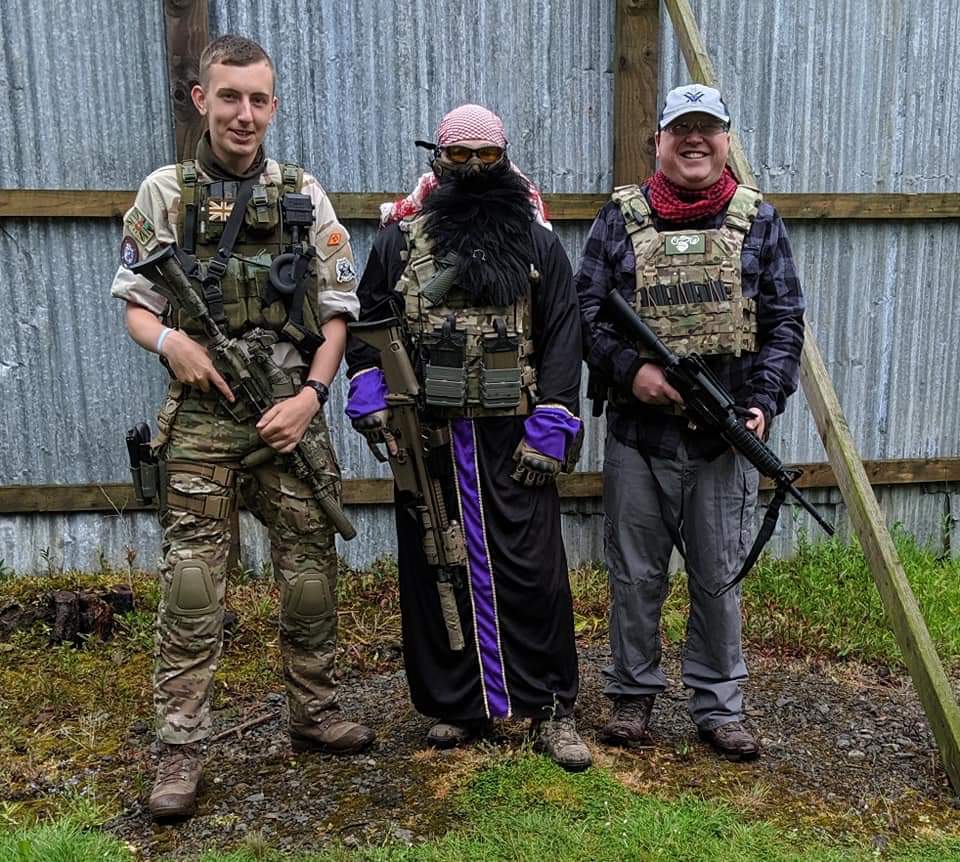 The Somali militia were – Taafe, Andy, Nacho, Si and Scott.

The US Rangers were – Stip, Aiden, Ronan, Albie, Jon and Aaron

We arrived friday afternoon in torrential rain to get our room sorted (at Catterick, we have the luxury of a nice warm, dry room, which saves bringing all the camping kit and is a great facility to fix weapons and dry off kit overnight). Without the Monkeys chief in attendance for this one, it got messy fast… 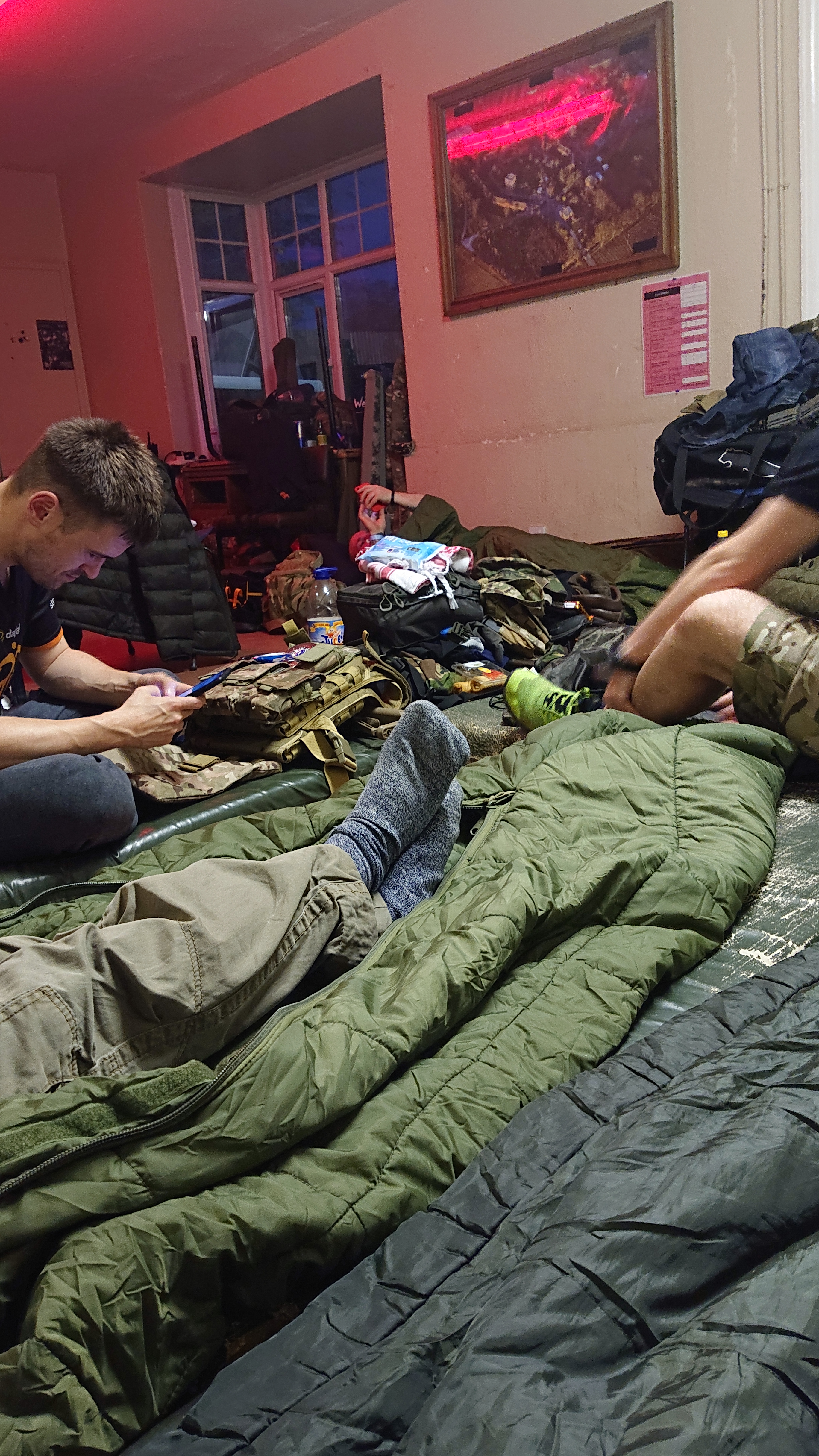 It’s great being away playing airsoft with the team but also nice to get together for a bit of social time too, especially over a nice Hawaiian pizza or two. Off the field, paths rarely cross so there was plenty of catching up to do.

Saturday morning was an early start, not helped by the sunlight pouring into the room at half 4. But, it does take time to gear up and go through final checks. Now, when I say sunlight, it was still raining. As game on approached, it got heavier and heavier. The militia, dressed superbly for the event, were sent to go and occupy the town, weapons being stored in caches and initially tasked with milling around unarmed until the Americans showed up…

Rangers were split up into 4 “chalks” (squads), and an additional chalk of Delta Force. Although we’d swapped out to tricolour desert shirts, we’d been watching some specialist groups on Facebook getting ready for the event with authentic Delta loadouts, to the smallest detail. The Delta guys’ loadouts were worth a trip out on their own, and it’s nice to see some real world impressions now and then. As much as airsofters think they can put a cool loadout together, it’s nothing compared to the real thing. Minus points for our guys, but we didn’t have the funds or prep time in advance to put an authentic kit together for just one event. 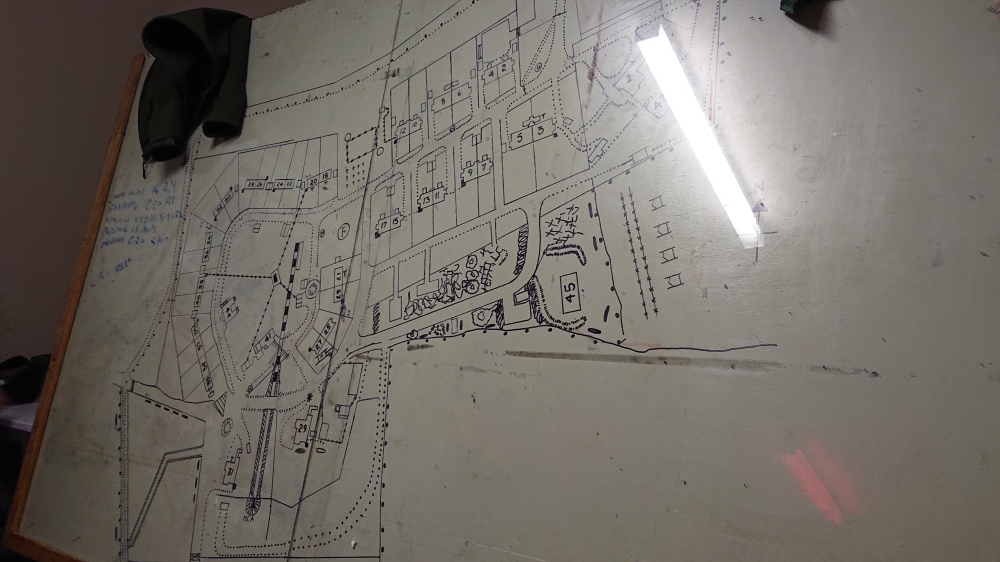 One by one, the chalks were dropped at four seperate buildings to form a perimeter, allowing the Delta guys some security to capture some high value targets. Without access to helicopters, we were bundled into a Snatch Land Rover (which is the most cramped thing I’ve ever had a ride in) and in/on a Saracen armoured vehicle and dropped into downtown Mogadishu.

Setting up a perimeter in the gardens of Building 27, the rain lashed down and we rotated two of our six into a first floor window to observe the locals. Who were doing a great job of hurling abuse at the ranger chalks, in dodgy accents, and kept us on edge as they walked past 27, both sides waiting for the action to commence. For the first hour, our comms systems worked great and the our ranger squad did an excellent job of securing the area and coordinating the defence. However, the sheer volume of water started to get into radios, headsets and PTT units causing half of them to fail, which we never recovered from. But we didn’t have time to repair anything as the action gathered pace. Once it did, it became a fast and furious day of working through the events of Operation Gothic Serpent;

Respawn rules at Catterick are that there are two regens, which alternate between being open for one team and closed for the other, for twenty minutes, with five minute total closures inbetween. This means that you can’t just return to the regen area and come straight back in, you have an indefinate wait before attacking in force as soon as the gates open. For the guys in the field, it means fighting to your objective and then knowing that the enemy will then hit you hard from behind you, so every objective needs to be totally secure.

The action continued into the night, with militia setting fire to mock cars and a lot of explosions throughout the day. Without our comms functioning, we soon found our squad very divided and struggling to get a grip on the game, and I don’t think any of the guys would argue against that. Our more experienced monkey counterparts on the militia side were a constant threat and some familiar snipers (Jordan and Lawrence from Sniperworks) on the enemy team kept US forces well pinned down.

Saturday night, after action, we headed back to our room for some sleep ready to go Sunday morning, unfortunately shattered half way through the night by a fire alarm. Morning came too quickly, but on these events you just have to get your kit on and get back out there. It was looking like the Rangers had taken a good beating the previous day, but as it came to a close in the last couple of hours, we had four seperate buildings to take and hold for extraction, just like the film. If we could hold all four, it would tie the weekend. This sparked some extra drive from the US forces. All was not lost.

One of those was our initial deployment building, 27, and we thought it would be a great idea to go back out the way we came. It turned into a very tense last couple of hours as we clung on with everything we had to try and catch a vehicle back to base. Militia were close, the snipers were still keeping our heads down, but we held firm with other Ranger elements, watching the minutes tick by. Come the moment of extraction though, we heard from our command that it could take up to another 40 mins, as the vehicles had other pickups to do once they were up and running. We’d heard the ranger chalks had failed to take and hold enough buildings, so the last thing we could do was try and get out alive.

It was a great feeling to hear the engines approach, but as soon as we stuck our heads outside the building we realised the militia had us surrounded. Throwing every smoke grenade any of us had, with Albie doing a superb job of coordinating the team, I broke rank and sprinted for the open door of the Saracen, only to be cut down a few inches away from being saved. Sprinted to respawn and back, but couldn’t fight back to the squad. A frustrating end to a frustrating weekend for the Rangers, but the militia team were too good for us.

A loss, but a great event put on by Stirling as ever and a great learning experience. We’ll definitely be doing more Stirling events in the future, but in the meantime us Rangers are going to have to get some practice in. I take my hat off to the militia monkeys, to Albie for being an excellent squad leader (I really can’t grasp CQB, my sniper brain can’t get the hang of it), Stirling staff and Stephen Reynolds who makes such damn good videos afterwards (check it out).